An old time power user goes through a paradigm shift he never would’ve expected, and now won’t ever look back

My Past of Computing

For the longest time I was always a traditional computing power user who wrangled and bent legacy systems to his will. Legacy, for me, is a variable instead of a constant, as it has taken on different values as I’ve moved through the ranks of tech geekhood. I first sharpened my teeth on MS-DOS Because everyone knows DOS will always be boss. and eventually moved through several iterations of Windows, which I merely tolerated as an operating system through years of learning how to tweak the shit out of everything it did. The whole time, however, there was something on the sidelines I was eyeing up as a new, forward-thinking computing experience. Something with less fiddling required, and a much more pleasant (IMO) user interface that didn’t look like a Fisher-Price toy — Windows XP, I’m looking at you.

In 2007 I made my official — and what I thought would be permanent — switch to the Mac platform when I got my 24-inch iMac, and Windows became my new legacy OS. It felt somewhat weird but also cathartic to use a system that I didn’t have to mess around with. It had a powerful UNIX base which I could get my hands dirty on, but only if I wanted to. Unbeknownst to me there was a huge paradigm shift happening around this in my computing life, even if it was only subconscious at the time. Using a Mac was a stable, beautiful, and pleasant experience, backed by an incredible ecosystem of software in both stock and third-party apps. Once the Mac App Store was released, I really enjoyed being able to get everything from one central source instead of the myriad of random — and potentially sketchy — sources that Windows users were offered at the time.

Linux was something I dabbled with as well, both single and dual-booting on my Macs, but I could never make the full switch to it for numerous reasons. Lack of software, hardware driver glitches, and overall just a feeling of death by a thousand cuts at the time. (Credit to Solus and ElementaryOS: when I tried them they were both really stable, though Bluetooth and trackpad quirks still dampened the experience) For servers, however, it’s the undisputed king.In 2012, I downsized to a 13” MacBook Air and this was the best computer I’d ever owned. (Those of you keen-eyed enough will notice something about that sentence). I loved the minimalist footprint and portability of the machine, and although I used it plugged into a monitor for a time I eventually switched to using it on a stand at my desk instead and eschewed the external display. In hindsight, the display on it was terribly sub-par even in comparison to my old iMac, but this MBA made up for it with its streamlined appearance, and blazing fast SSD and RAM performance that literally ran rings around that beastly desktop. I was hooked on small form-factor — but still traditional — computing, that is until Steve Jobs revealed something that would become truly revolutionary for me.

To be honest, when the iPad first came out I wasn’t on board. It just struck me as a giant and very heavy iPhone, without enough to really distinguish it from its smaller and pocketable sibling. My thought was apart from book reading and surfing the web, what would be the point? I didn’t “get” the iPad, nor Steve’s vision for the device. I didn’t jump on board the iPad platform until the third model, and then donated it to one of my in-laws to pick up an Air, and eventually an Air 2 which was the device I used up until recently. The Air and Air 2 were the catalysts that sparked my finally “getting” the iPad, and where Steve envisioned computing moving toward. 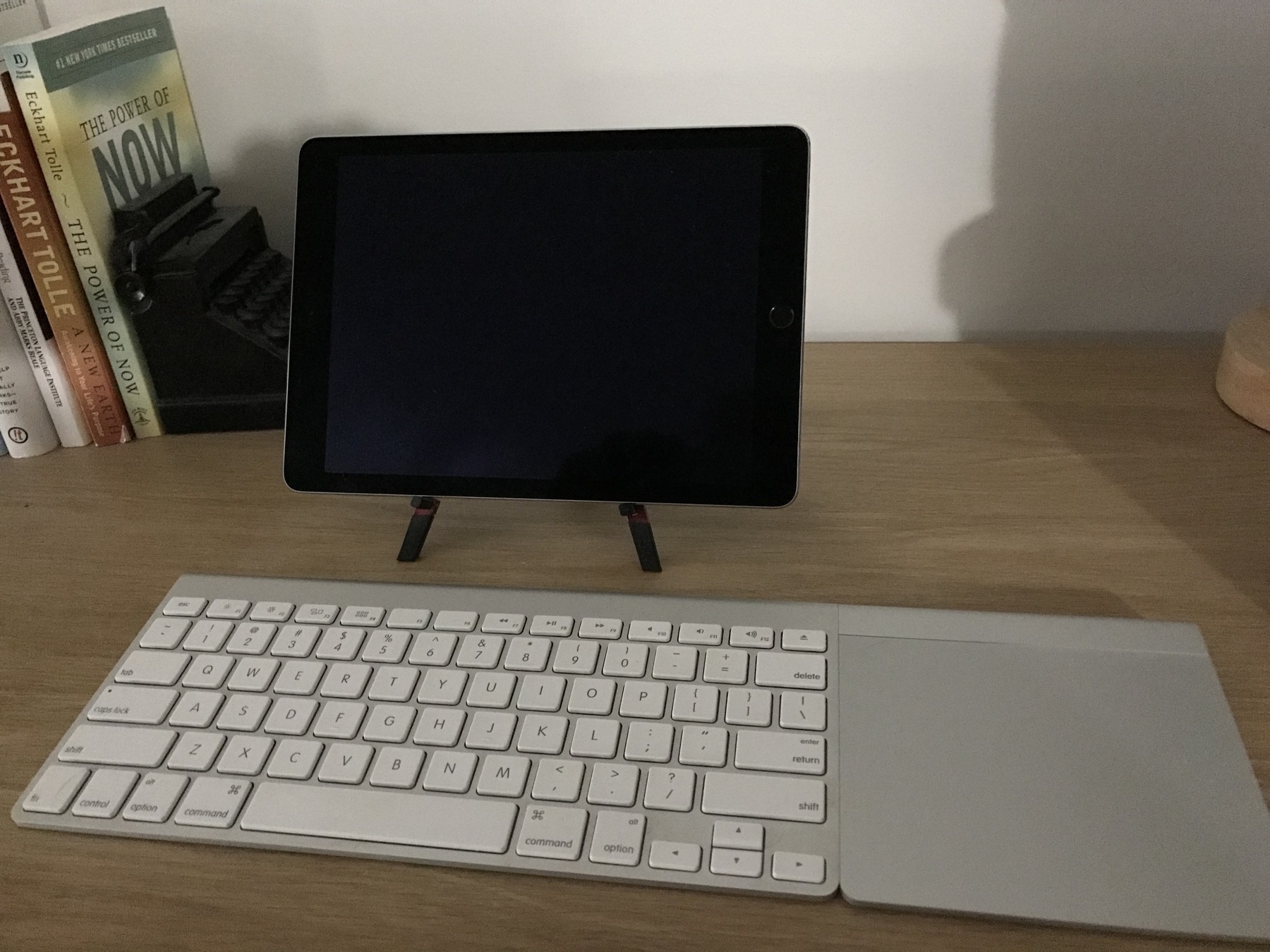 My iPad Air 2 I was able to do literally everything on this device, and to this day doesn't owe me a single thing.

My Air 2 in particular was an incredible workhorse for me, taking over my entire workflow for both my personal life and my job. It literally left me wanting for nothing except maybe a bigger screen since it became my only computer, first through choice and then permanently when I traded in my MacBook towards my new iPad. Truth be told, I only had to break my MacBook out once for an issue with my modem as it needed an Ethernet connection which I had an adapter for. The Air 2 had become a slow performer at the end of using it, but the fact it was still able to handle everything I threw at it after it being several years old was a testament to the device for me.

And that paradigm shift I alluded to earlier? Pushing myself to become iPad-only and enjoying it immensely hammered home the idea that not only does it work for me, but that I’m at the point where I don’t want to manage an operating system at all anymore. I just want to write, create, play, and relax. Just like I first experienced with the Mac, I found iOS/iPadOS to be a simple yet powerful experience that I didn’t have to babysit (even in comparison to macOS). The power user in me can still move my workflows to this device, but even more so I appreciate how the device adapts to me instead of the opposite.

My Future of Computing

What you see above is computing nirvana for me. As a minimalist, I’ve never been happier with my setup. And as a long-time geek and computer fanatic, this M1 iPad Pro is without hesitation the best computer I’ve ever owned. It’s not even close. Nothing I’ve thrown at this machine has even slightly registered against the power it has under the hood, and it handles every part of my workflow with aplomb. It has made personal computing fun and exciting for me again, and I’m never looking back.

The job of the iPad should be to be so powerful and capable that you never need a notebook.

Not only did it replace a notebook, it relegated the Mac — and all traditional computing platforms — to legacy status for me; something I never would’ve imagined possible if you’d told me a decade ago. I’ve long grown past the days where I enjoy tinkering with window managers, complex software installations, and administering third-party command line utilities. I’ve never smiled and felt more comfortable than when I sit down in front of this machine. Never had an almost child-like joy in swiping in, out, and around the interface like a present-day version of Tony Stark. Never used a computer and operating system that truly stays out of my way, and allows me to focus solely on my content.

And never felt more excited about the future of my computing.